UPDATE: Following the leaked copy of its ESG Guidelines and a letter from Client Earth that critiqued Lloyd’s lack of transparency, Lloyd’s has now published the Guidelines on its own website. Lloyd’s now needs to make crystal clear whether its members are still asked to implement to the ESG commitments that Lloyd’s made in 2020, and clarify whether its members continue to insure the Adani Carmichael coal mine and the TransMountain tar sands pipeline and if so when they will stop doing so.

The Insure Our Future campaign has published a leaked copy of Environmental Social and Governance: Lloyd’s Guidance For Managing Agents October 2021 to inform the media, insurance sector, regulators, ESG rating agencies and the public of Lloyd’s inadequate climate and ESG policies and greenwashing.

This morning, Insure Our Future called attention to the leaked guidelines with a large message on an advertising van parked outside Lloyd’s headquarters. The message is for Lloyd’s management to “Stop Greenwashing; Publish the ESG Guidelines; Mandate the ESG policy & Stop Insuring Fossil Fuels”. 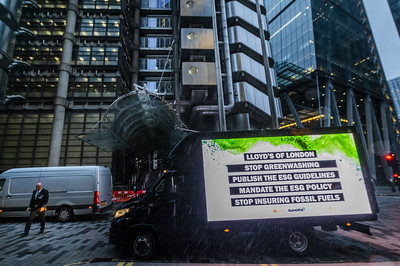 Lindsay Keenan, European Coordinator of Insure Our Future said: “We have published the leaked copy of Lloyd’s ESG Guidelines because Lloyd’s has so far refused to do so. The guidelines clearly expose Lloyd’s roll-back of the climate policies it announced in December 2020 and demonstrate a blatant case of ESG greenwashing.”

On October 25, 2021, Lloyd’s stated that it was “…providing market guidance and best practice for establishing an ESG framework,” but has so far refused to publish the guidelines. Even more concerningly, Lloyd’s has made no mention that their new guidelines roll back last December’s ESG policy with the statement that “We are not mandating the exclusion of these policies,” and that it is “… up to each individual managing agent to decide their own ESG targets and policy.” On October 20th, just before COP26, Lloyd’s attempted to distract from their watered down ESG policy by trumpeting the fact that it had joined the Net-Zero Insurance Alliance (NZIA) and was setting a net-zero by 2050 target.

Leyla Larbi, Campaigns Manager, from watchdog organisation SumOfUs said: “In the last week, 7000 SumOfUs supporters have mobilised and written to Lloyd’s Chairman Bruce Carnegie-Brown and its CEO John Neal calling on them to stop their blatant and unacceptable greenwashing. Lloyd’s must uphold its 2020 commitments and mandate its members adopt a climate policy that excludes all underwriting and investments in coal, tar sands and new oil and gas projects. In a number of petitions targeting Lloyd’s over the last year, tens of thousands of our members throughout the world have been demanding Lloyd’s stop paying lip service to climate change and end its support for the fossil fuel industry.”

Examples of Lloyd’s ongoing greenwashing include an interview with its CEO John Neal at COP26 in which the statement on screen below his speech said “Lloyd’s to end underwriting of coal, oil sands and Arctic drilling by 2023”. Just last week, in response to a creative climate meets cricket themed advent calendar handmade for him by a team of mothers from Mothers Rise Up and Parents For Future UK, Lloyd’s Chairman Bruce Carnegie-Brown stated on Twitter that, “We are not underwriting any new thermal coal mines or power stations or Arctic drilling or Oil sands projects from 01.01.22,” and “’Please be assured that I am committed to helping the Market get to Net Zero by 2050 in an urgent but orderly way.”

Keenan noted, ”We would like to believe Lloyd’s statements that its upholding its ESG policy, but instead we see it is no longer mandating its members to take action, and still refuses to make clear whether it continues to insure some of the world’s most climate destructive projects, such as the Adani Carmichael coal mine and the TransMountain tar sand pipeline. Lloyd’s actions need to match its words and it has a duty to make the facts and its policies clear.”

Below we contrast statements from Lloyd’s 2020 ESG report with and its 2021 ESG Guidelines as examples of how Lloyd’s has rolled back on its commitments.

2021: We think it is a sensible and pragmatic ambition, but we are not mandating the exclusion of these policies. It is up to each individual managing agent to decide their own ESG targets and policy, including their approach to sustainable underwriting.

2020: We will phase out new investments – and – existing investments… by the Lloyd’s market and the Corporation.

2021: This market wide ambition remains, and the Corporation has applied this in respect of Central Fund assets. However, we are not mandating the exclusion of these investments. It is up to each individual managing agent to decide their own ESG targets and policy, including their approach to responsible investment strategies.

2020: …we are setting targets for sustainable underwriting and responsible investment for the Lloyd’s market. The announcement of these targets follows feedback from and in-depth discussion with our stakeholders.

2021: Lloyd’s approach will be to drive progress towards achieving net zero by 2050, recognising that this will require the market to make its own decisions on the risks it underwrites, the investments it makes, and the way in which to reduces its operational carbon emissions.

2020: Our stakeholders – from customers and regulators, through to market participants, employees and ratings agencies – have a growing expectation of greater reporting and transparency.

2021: Will the data initially being provided by managing agents as part of the Sustainability Transparency and Reporting regime be reported on publicly at either managing agent or syndicate level? – No. The data will…be used to form an aggregate view of the market’s underwriting portfolios.