Friday, May 21 – Following the update to VIG’s climate policy this week, climate campaigners denounce the insurer’s continued lack of clarity on the application of its coal policy and its silence on oil and gas. This morning at 9:00am CET, Campaigners from #aufstehn held a protest at VIG’s Annual General Meeting with a banner outside the insurer’s headquarters reading “VIG – protect what matters. Insure our future, not fossil fuels.”

Demands from climate campaigners come amidst this week’s report from the International Energy Agency, confirming that insurance companies no longer have any justification for supporting new oil, gas or coal projects. 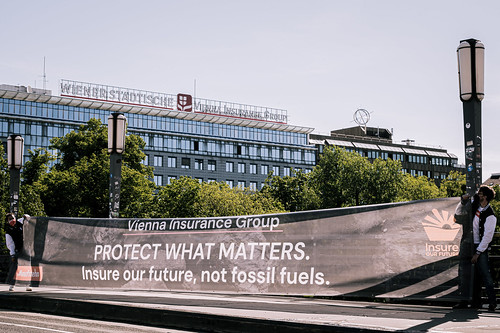 Tuesday, May 18 – Following a report exposing Vienna Insurance Group’s (VIG) insurance of  coal power plants in the Czech Republic and other EU countries, the company has issued an update to its coal policy, stating that: “If no credible exit plan can be presented, the insurance contract must be terminated as soon as possible. This also applies to the reinsurance business, where we can directly influence the conditions as a leading reinsurer.”

The report by Czech climate campaign group Re-set, released on 26 April 2021, revealed that VIG continued to insure highly polluting coal plants and companies in the Czech Republic, including ČEZ and EPH. Despite its 2019 Climate Change Strategy, VIG was insuring coal companies even when they did not have “…a credible plan for exiting coal-fired generation with a just transition plan within two years.”

Josef Patočka, Researcher and Campaigner at Re-set: platform for socio-ecological transformation in Czech republic: “We welcome VIG’s announcement to fully apply its coal policy and to not renew its contracts with highly polluting coal companies. Notably, this new policy appears to rule out VIG’s continued insurance of Czech energy corporations CEZ, EPH and Sev.en Energy, none of which has a credible coal exit plan. We call on VIG to clearly confirm that they will now cease all business with Czech coal corporations ahead of their AGM on May 21st.”

Johanna Morandell, Climate Campaigner at #aufstehn in Austria: “VIG appears to have finally closed the big loophole in its coal policy. However, they continue to remain silent on oil and gas. VIG has the opportunity to stop lagging behind the European insurance industry, and instead lead the exit from new coal and gas expansion projects and the phase out of oil and gas production. VIG has to decide which side of history it stands on: will it support halting the climate crisis or will it keep enabling Europe’s biggest polluters?”

Kuba Gogolewski, Senior Finance Campaigner at Fundacja “Rozwój TAK – Odkrywki NIE” in Poland: “We welcome VIG Re’s commitment to exclude coal from treaty reinsurance when they are the leading reinsurer. Treaty business makes up most of the reinsurance market and it has been a major loophole in coal underwriting that has started to be addressed. We call on all reinsurance companies, such as Munich Re, Hannover Re, SCOR and MAPFRE, to follow the lead set by Swiss Re this spring.”

It is understood that VIG’s updated policy also means that they will not renew insurance for any other coal company throughout the Central and Eastern European region, including Bulgaria, Romania, Serbia and Turkey. However, VIG has yet to make these details clear.